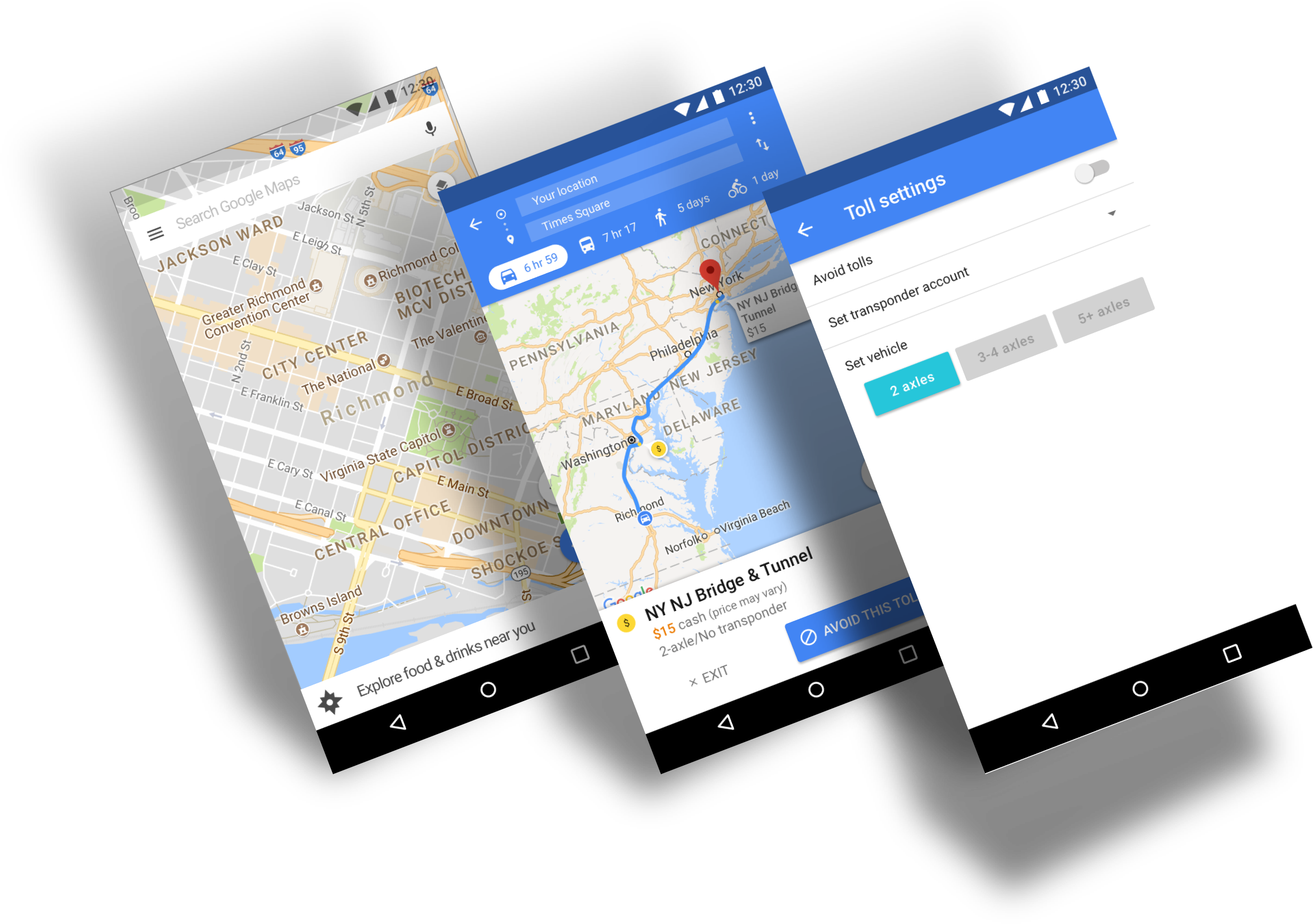 Above/ Screens of proposed toll features

Giving road trip travelers financial transparency by allowing them to customize routes based on toll pricing and preferences in Google Maps. By compiling known toll information to the driver, she or he can focus on the trip at hand with less surprises.

It all started when I got tired of guessing the amount of money I had to bring on roadtrips. I took the #1 navigation app in the App Store and reimagined how Google might implement toll pricing transparency.

To begin, I asked the following questions:

Are road trips still a thing?

AAA did a study concluding that road trips have gained popularity as many people now value spending money on memories more than material items. Not only that, but driving is still the more practical option when traveling due to lower costs and less packing restrictions.

72% of the U.S. implement tolls. There are currently 17 total toll networks with the largest being E-Z Pass. States are increasingly using tolls to fund transportation improvements. The amount of the toll usually varies by vehicle type, weight, or number of axles, with freight trucks often charged higher rates than cars. The most common variable across all 17 toll networks is the number of axles. Most people drive 2-axle cars so that must be chosen as the default.

Tolls are used to fund the upkeep of the road system. When driving on unfamiliar routes however, drivers have no way to prepare to pay for tolls, some of which may be cash only.

What do people do now?

I decided to do some social listening and went on the world’s largest focus group: Reddit. I opened a post in r/roadtrip to ask what people usually do.

Many suggestions on Reddit mentioned they do the following:

A couple apps were mentioned, such as Toll Calc. Many of these resources either needed too much information (i.e. total weight of car) or calculated tolls on a static map. This meant I would have to switch back and forth between apps to drive and keep informed. Currently, all navigation apps provide users with the choice of either avoiding all tolls, or allowing all tolls. Beyond this, there’s no customization. 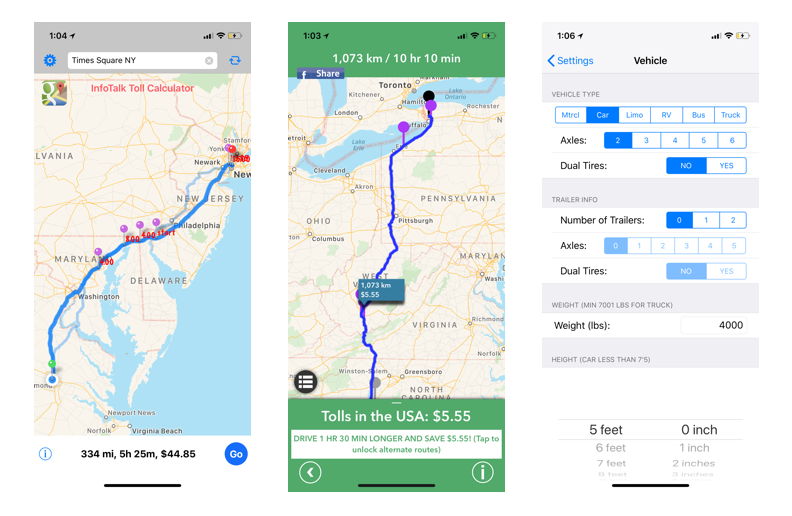 Above/ Sampling of existing toll apps

What does Google Maps do currently?

Within the app, I saw a couple key areas to improve. 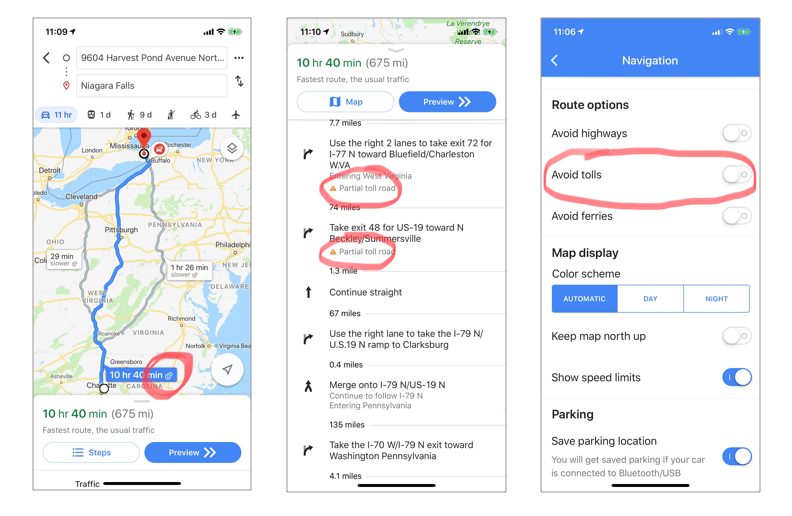 Above/ Current toll icon in Google Maps on iOS (left), A different icon is used for tolls (center), Toll customization is only a sweeping "avoid" toggle (right)

What are the benefits of in-app toll calculations? 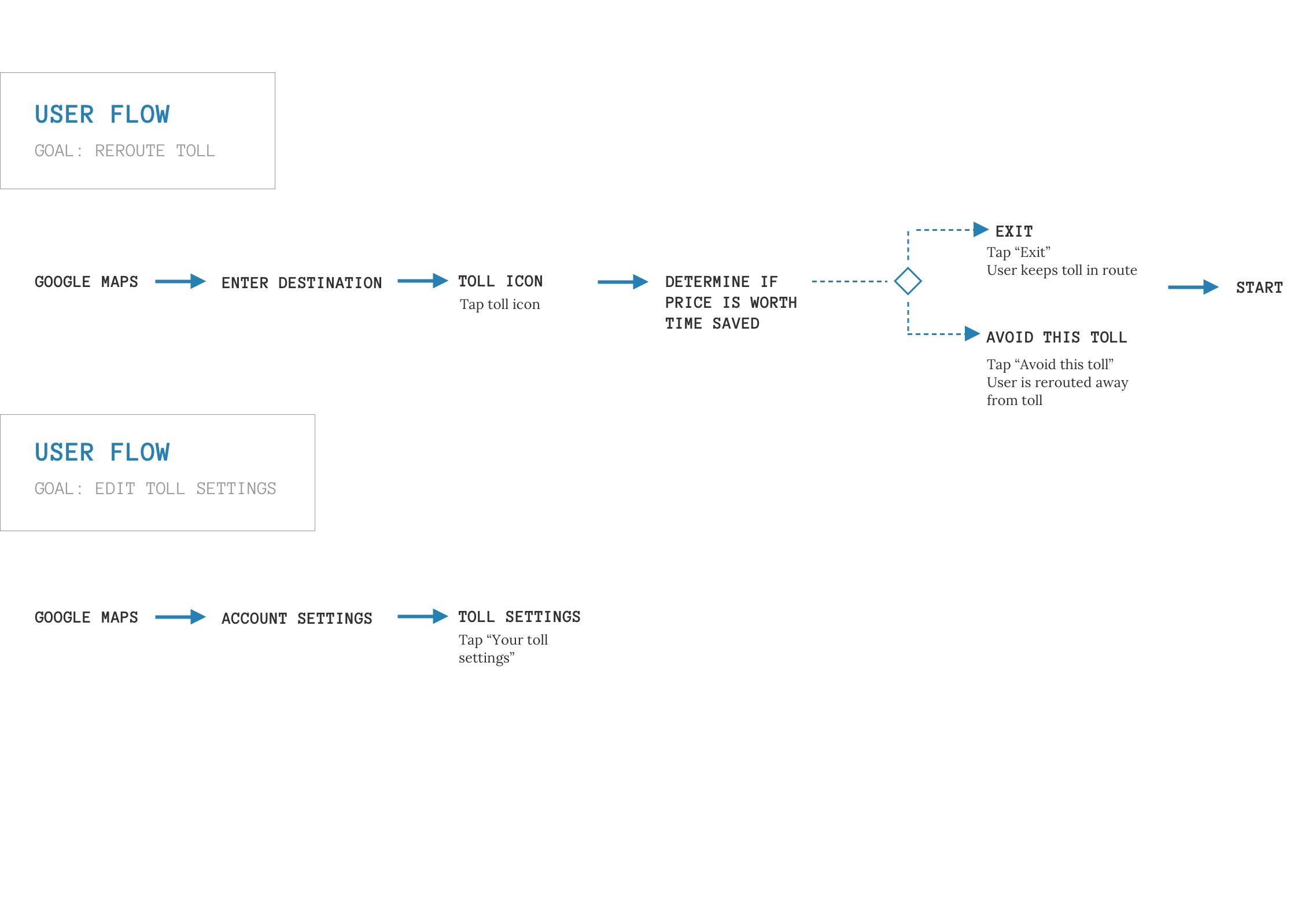 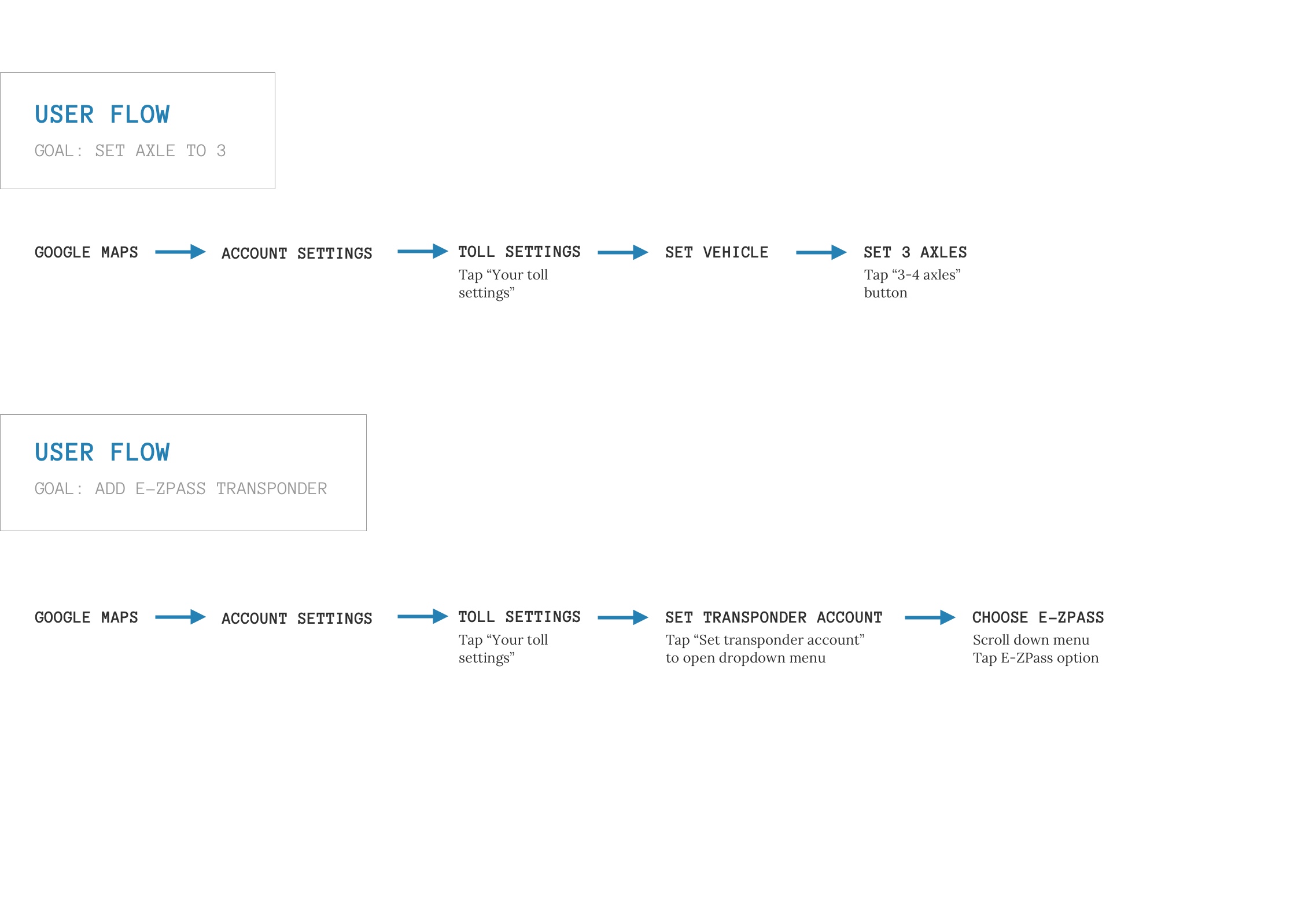 The current icons for tolls are unclear and don't stand out. By redesigning the toll icon to be yellow with a dollar sign, the user can quickly identify any toll road that exists on their route. 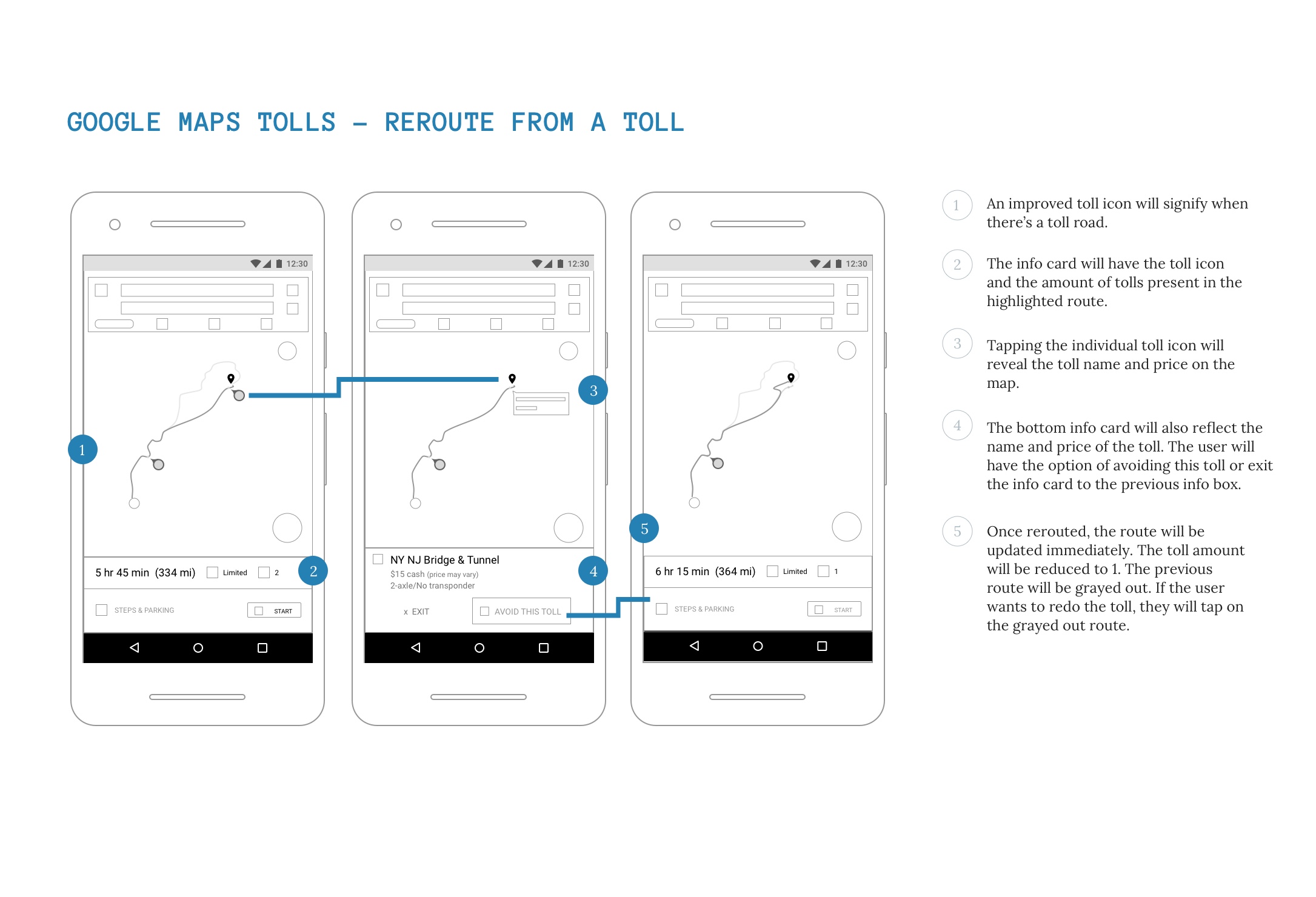 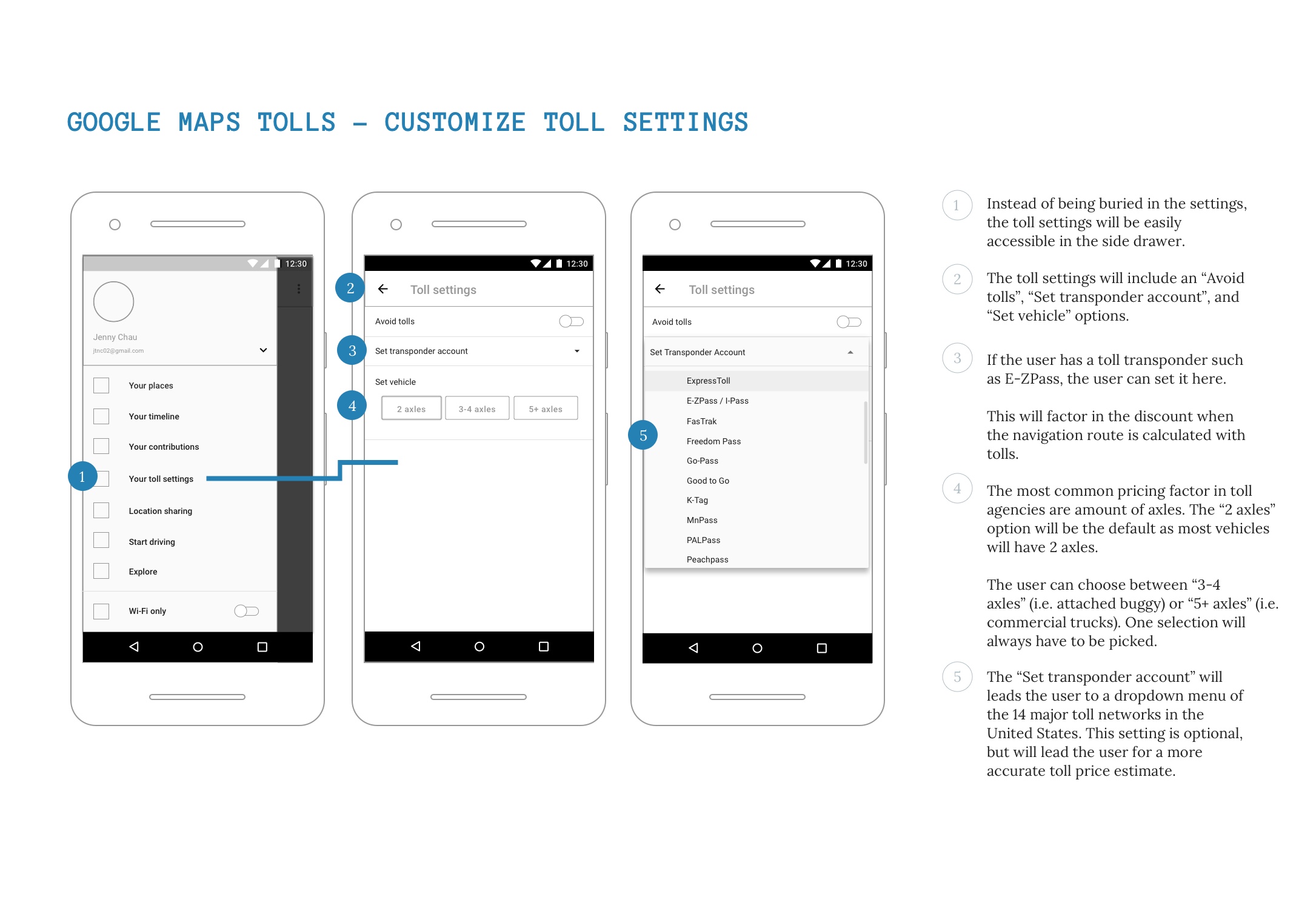 One of the most common feedback I got was to be able to control time and cost.

I initially tried to design a feature to control time versus cost payoff.

An example use case would be if a driver refused to pay $5 for a toll, but if the driver realized it would save them 30 - 60 minutes of driving, s/he would probably pay the $5. How can Google Maps show this? Can the driver place certain constraints for the app to populate this information?

In the end, I decided not to add this feature. Not only could it result in a null set, but hiding information would go against my original project goal of transparency. All options should be laid on the table for the driver to make an informed decision.
‍

A network for all

After some feedback, an idea I played around with was improving the overall toll experience by implementing a third-party transponder for all vehicles. What if drivers could buy a transponder by Google using RFID technology and use it across all toll agency networks across the country?

While the experience would be much more seamless, it called into question the current structure of toll agencies and why they haven't joined forces already. I decided this was out of scope and focused on implementing a single feature improvement. 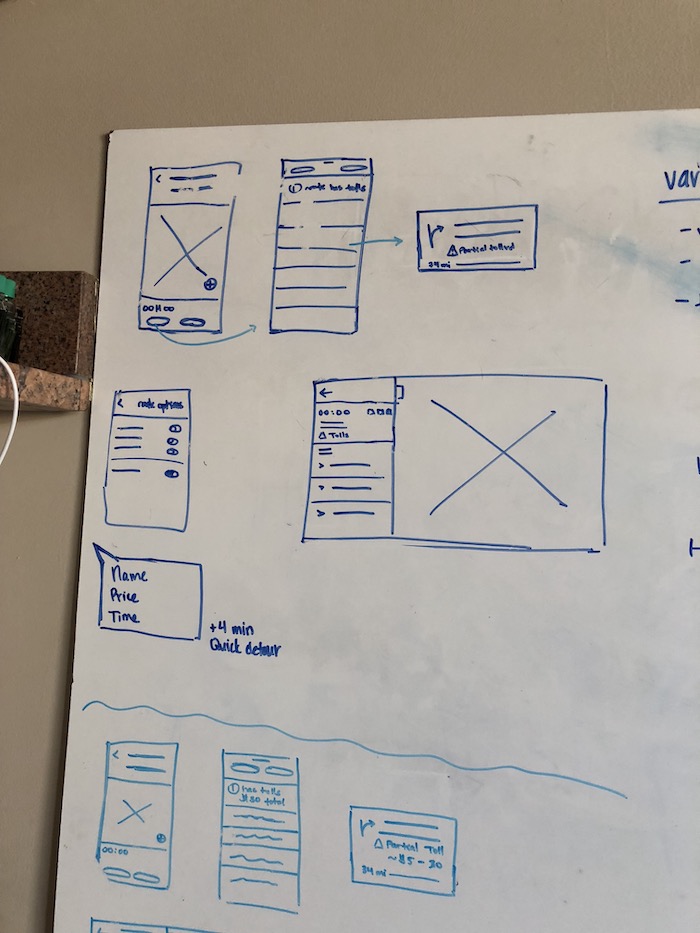 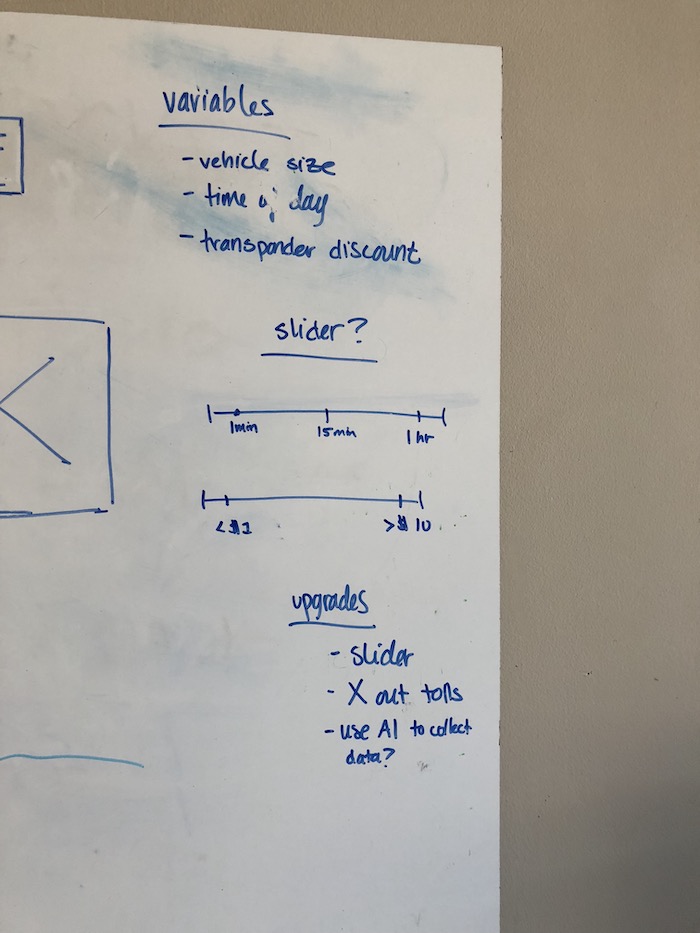 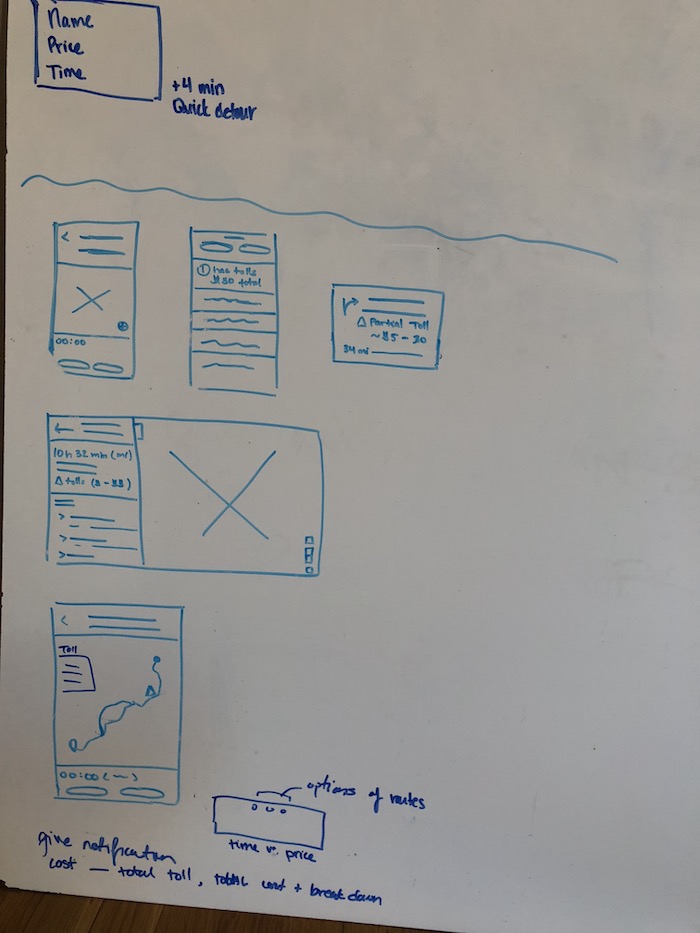 This is some text inside of a div block.

As designers we're not supposed to design for ourselves, so it was pretty awesome to realize I wasn't alone in my toll frustrations. I was very glad to have proactive Redditors willing to help inform me of the struggles they faced when presented with a similar issue. I also had to learn how to use a brand's design guidelines. While it's easy to plug-and-play, I still had to study Material design to ensure placement and design aligned with pre-existing notions.

Looking back at this side project, I would like to put in more time to figure out a solution for controlling time and cost without reaching a null response. Furthermore, drivers may or may not realize what's an "axle" since it's not common knowledge. Even though I defaulted to two axles (most common vehicle), this could be seen as a barrier to entry. It would be nice to leverage this as an opportunity to educate users.